One of my favorite things to eat when I was younger was chicken nuggets, especially those dinosaur shaped ones. Unfortunately I learned how those are made and I became a vegetarian so it wasn't something I could eat anymore.
Thankfully Michael and I came up with this recipe for cauliflower and broccoli nuggets, and of course we make them with dinosaur shapes :)

1. Steam the cauliflower and broccoli until tender. Blend in a food processor until it has a small texture and is sticking together. You may need to blend this in batches.
2. Mix in the rest of the ingredients. If the mixture is too wet, add some more bread crumbs. If it's too dry add a little bit of water. You want it to stick together, but not be too sticky.
3. Lay out some plastic wrap and press out to 1/2 inch thickness. Cut out into shapes with cookie cutters.
4. Bake at 375 for 25-30 minutes, turning after 15 minutes. They should be browned on each side and cooked through. 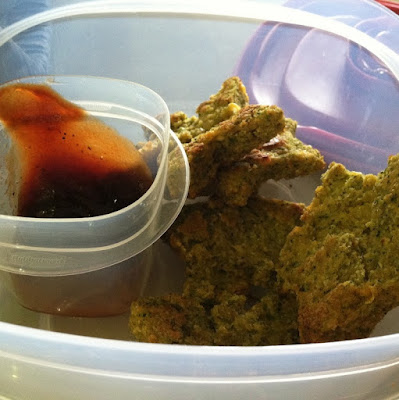 What I've Been Up To

Hello hello everyone!
I started this year with a planner so I could start planning out my blog posts and be more consistent with posting.
Well....clearly that didn't happen.
It's been a tough 2 1/2 months already so I'll just catch you all up and then go from there.

If you don't follow me on Instagram (which you should) I posted about the problems I've been having in my shoulder since December. I was in a car accident with my in-laws and I got severe whiplash on my right shoulder and it's been causing some serious problems since. I've been going to the chiropractor and recently started going to an acupuncturist and I'm really feeling some positive results. 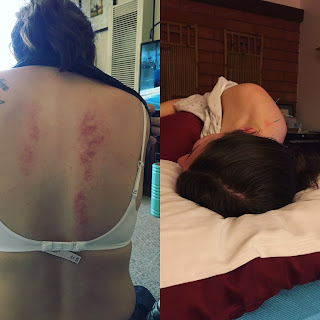 The bruising and scrapes on the back are a technique of acupuncture, not from the car accident. 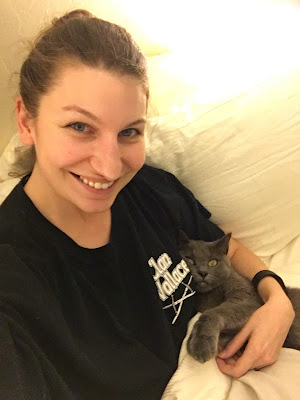 Michael and I fancied up for a wedding 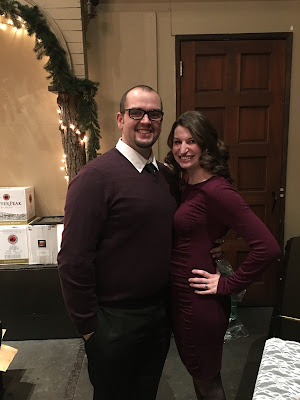 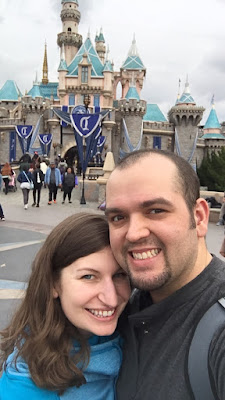 We had an awesome Valentine's Day 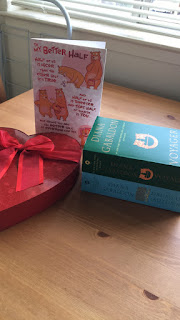 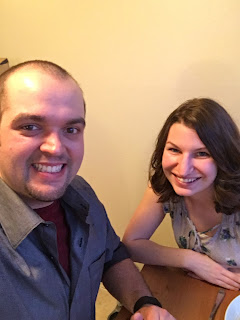 And finally, my wonderful grandma passed away recently. It was expected because she was in such poor health, but it still hurts my heart to not have her here. I will write a post dedicated to her soon when I've had a little longer to sort it all out. 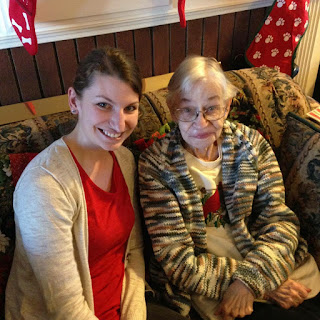 Promise to be back soon!

Posted by Brittany at 6:59 PM No comments:

Here we are, at the end of our honeymoon story!

On the opposite end of the Royal Mile from Edinburgh Castle is Holyroodhouse Palace where the Queen stays while in the city. It was absolutely stunning, however, there were no cameras allowed inside the gates! I did get some pictures though
We took the audio tour that walked us through the ceremonial procession that the Queen takes when she arrives at the palace. We got to see so much historical stuff. They even had Queen Mary's bed still displayed in a glass case. We got to see a bunch of little knicknacks and some pretty monumental historical items, like Bonny Prince Charlie's sword and Robert the Bruce's skull.

One thing I learned was that the abbey was actually there before the palace was. It was so cool to stand in the ruins of this super old building.
We were lucky enough to be there when they still allow you to walk through the gardens (they're closed from November through March or April). The views were absolutely breathtaking 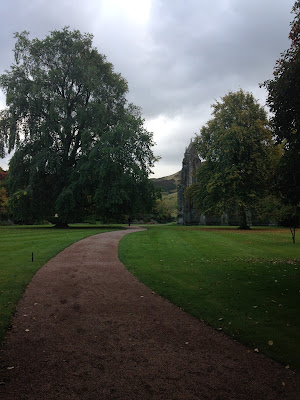 And there are actually ruins of other buildings that were part of the abbey throughout, which you're not supposed to walk on, but some idiot decided to go tromping through the ruins to take pictures. Michael and I watched a security camera pan and stay right on him and eventually saw a security officer coming down the path to talk to the man.
One thing I didn't know about Edinburgh is that it has 2 dormant volcanoes in the city. Arthur's Seat is one and on the opposite end is what Edinburgh Castle sits on. People were hiking up the mountain and one day I'd love to do that and see everything. 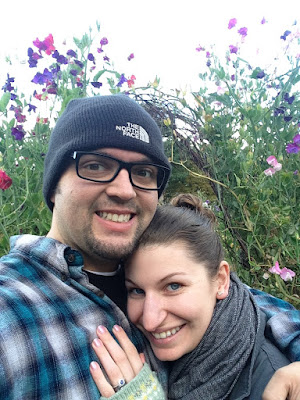 And there we are folks, the end of our amazing Scottish honeymoon! We both can't wait to go back and explore such an amazing country!
Slàinte Mhath!
Posted by Brittany at 9:08 AM No comments:

Back again!
Michael and I couldn't go to Edinburgh without going to see Edinburgh Castle.
But I have to say, despite it being so famous, I didn't like it nearly as much as Stirling Castle.
I didn't realize that it's still used by the military so a good portion of it was inaccessible to the public. 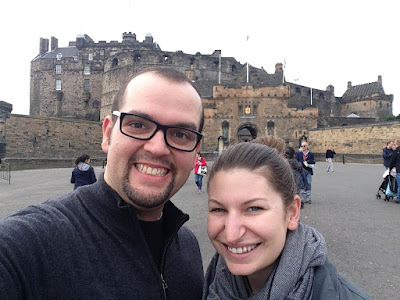 Every year when the Queen visits Edinburgh she is given the key to the city and she gives it back to someone (can't remember who) for safekeeping. They have all the keys the Queen has been presented displayed in the great hall as well as old weapons.
This giant monster of a cannon was put in in 1449 and it fired cannonballs that were about 3 feet in diameter. I could literally crawl into the barrel
It's the oldest building at the castle and was built in the 1200's


When you're in Scotland you absolutely have to do whiskey tasting. We went through this whole "ride" that showed you how whiskey is made and taught us about all the different regional whiskies. At the end we got to taste all the different types. 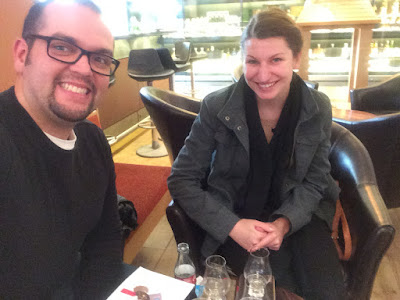 It was so much fun, but I'm definitely not a straight whisky kind of girl, at least not single malt. 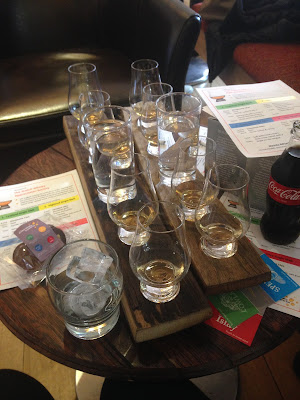 And that's it for part 3! Stay tuned for the last part!
Posted by Brittany at 3:20 PM No comments:

Hello hello everyone!
Time for part two of my honeymoon in Scotland

Michael is from Clan Wallace so we absolutely HAD to go see the Wallace National Monument. However, none of the guide books informed us that it was 246 steps up a spiraling staircase, but it was stunning.


The monument was huge and all those pillars on the left side? That's the staircase

This picture still doesn't do the sword justice, it was gigantic 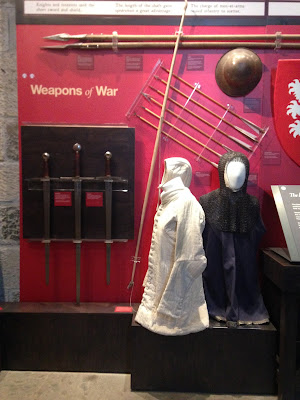 
If you know any Scottish history, the battle of Stirling Bridge was William Wallace's famous battle and they explained exactly where it was when you're at the top of the tower.

When we were planning our trip to Scotland I looked up a bunch of cool places to see. I'm a huge fan of the Starz show Outlander that was filmed in Scotland, but there was one castle that it's especially famous for, Castle Leoch, or in reality, Doune Castle.


I kid you not, I just about cried when I saw it. I was so excited to see where they had filmed everything. 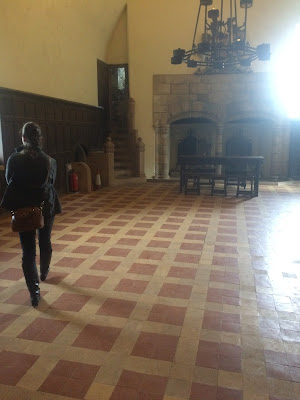 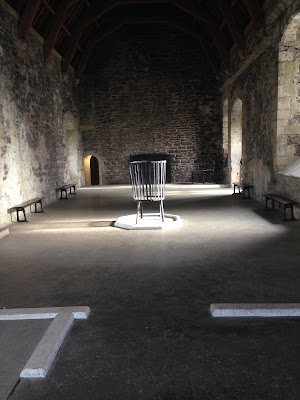 Doune Castle was never finished so it's actually quite small, but it was so beautiful to see.
And if you've ever seen Monty Python and the Holy Grail you might recognize this wall
Yes, the entire movie was filmed at this castle too. Our whole audio guide was done by John Cleese and Michael and I could barely stop laughing the entire time. 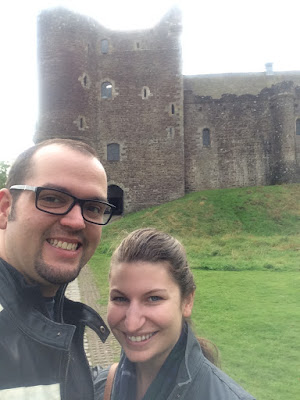 Hello everyone!
I'm finally (FINALLY) getting around to posting about the honeymoon.
Michael and I went to Scotland for the first time and it was amazing. I can't even describe how beautiful the country is.
We stayed in Edinburgh and our second day we went to Stirling to see Stirling Castle.

The flight to Scotland was not nearly as bad as I was anticipating. I brought my ipad to watch movies on, but United now has screens on the back of the seats so you can watch movies for free. We flew over Ireland, but it was so covered in clouds we couldn't see it (can't wait to go there). We arrived in Scotland at 8am and I was literally bouncing in my seat I was so excited. We drove to our B&B hours earlier than our check-in, but thank god the innkeepers were so nice they let us check in and put our bags in our room.

We took the bus into Edinburgh center and stopped somewhere I had looked up to get some tea and wifi. I loved that anywhere you got jam they came in these tiny individual jars. Part way through the day I was ready for a nap (never slept on the plane) so we went back to the B&B and passed out. Both of us have never slept so hard in our lives!


The next day we drove out to Stirling which is about 30 minutes northwest of Edinburgh to see Stirling Castle. 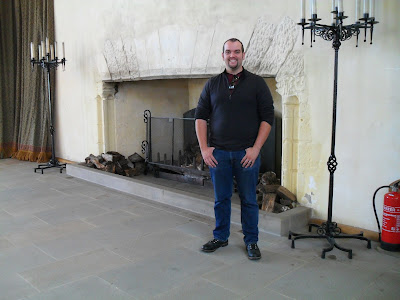 Stirling Castle has been restored and made to be a historical monument so it had a ton of historical stuff in it. It was really exciting to see all these old artifacts and how the castle looked way back when.

Posted by Brittany at 8:00 AM No comments:

Brittany
Hi everyone, thanks for stopping by! I'm Brittany and I'm a 20-something year old college grad, personal trainer, and Zumba instructor. I love exercising and creating healthy recipes to help me reach my goals and well as helping others reach theirs. My life also wouldn't be complete without my boyfriend and best friend, Michael, and our furbaby Link.